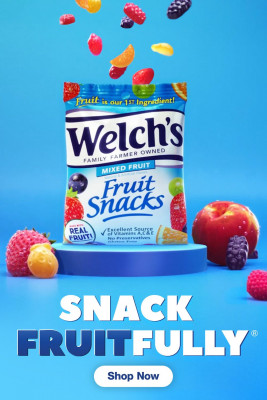 In this article, we share how Welch's Fruit Snacks have changed the way people enjoy a quick, sweet snack.

Welch's gummies and relationship to the parent brand

Welch's marmalade is produced by another company, Promotion in Motion. Over the past 20 years Welch's gummies have become one of the most popular fruit snacks in the United States. And this is a truly unusual event.

The culture of consuming fruit snacks

Marmalade has been popular in the West since time immemorial. Just remember Haribo. However, gummies are perceived by most not to be the same as a fruit snack. And Welch's gummies were marketed precisely as a relatively healthy alternative to traditional carbohydrate snacks.

It must be admitted that the composition of the sweets really commands respect. Advertising claims, and in this particular case, advertising is not lying, that the first ingredient in the composition of sweets is fruit. Indeed: the first ingredient in Welch's gummies is a fruit puree made from grapes, peaches, strawberries and raspberries. And to match the tastes of modern Americans, Welch's gummies are fortified with vitamins C, E, A.

With this composition, Welch's gummies outperformed many competitors, which are made primarily from gelatin with sugar. In a relatively short time, Welch's has become a popular snack. A small package (25 g) is enough to have a snack with something pleasant, low in calories and free of gluten and lactose.

While recognizing the quality composition of Welch's gummies, it should be recognized that they contain sugar, corn syrup, and "natural and artificial flavors". Regarding the last point, the company even had litigation, but let's face it. Almost any modern "colored" desserts and drinks contain dyes that are allowed for consumption.

In this context, it should be borne in mind that American food technology standards are the most strict. One of the circumstantial evidence of this is that the labels of American products do not simply indicate "vegetable oil". Manufacturers are obliged to clarify which specific oil is used: rapeseed, olive or palm oil.

The norms existing in the USA apply, of course, to the producers of fruit snacks. The ingredients used in the manufacture of Welch's gummies are subject to approval by the Food and Drug Administration. You need to understand that compared to other snacks, fruit snacks are more useful, but you should not turn them into the main dish of the day.

Where can you buy Welch's gummies?

Many of our customers are familiar with Welch's gummies via Qwintry. The package of the fruit snack in the parcel is the trademark of the mail forwarder. However, Welch's is not officially sold in many countries. What to do?

A new project of Qwintry will help you, it is the Qwintry.Store grocery and cosmetics store. The online store contains high-quality goods from the USA and Germany, including Welch's gummies.

For ordering fruit snacks and other unique products you just need to sign up on the website. It will take you no time. Are you already using Qwintry services? Great, you can log into Qwintry.Store with your existing account.

Our staff regularly replenish the catalog with only first-class products so that you do not have to check the quality of the goods.

Qwintry.Store: we deliver the best.